CallLocation
User registration is disabled in this demo.

Please enter your username or email address. You will receive a link to create a new password via email.

The surprising stat that proves Australians are much richer than they think – and the postcodes where house prices are surging by $900,000 a year

Australians are a lot richer than they think thanks to rising house prices and a recovering share market boosting wealth levels.

While many people paying off a mortgage won’t feel rich, the statistics say otherwise with average household wealth surging by 20.3 per cent during the past year.

As of June, per capita wealth stood at a record $522,032 based on the average riches of both couples living together and singles as measured by the Australian Bureau of Statistics.

Postcodes near schools have done particularly well, with house prices in some suburbs of Sydney climbing by $900,000 in just a year.

Net household wealth is based on subtracting debt from what people own outright, from the equity in their home to shares, superannuation, cryptocurrency, bank savings and assets like cars and boats.

Scroll down for video

From the start of April until the end of June, as Sydney went into lockdown, average wealth levels increased by $27,782 or 5.6 per cent.

‘So while wage growth remains tepid, the value of assets is surging,’ he said.

The Australian share market’s benchmark S&P/ASX200 during the past year has climbed by 25 per cent, briefly touching record highs in mid-August.

By comparison, wages are growing at an annual pace of just 1.7 per cent and have been below the long-term average of 3 per cent since mid-2013.

‘Growth in household wealth continued to be driven by residential property prices,’ she said. 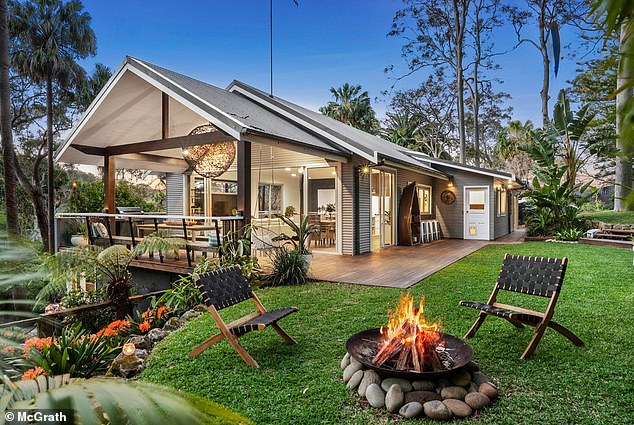 Houses near schools are surging at levels well above the average, new Domain sales data for July 2021 showed. Median prices at Avalon Beach (pictured is a house on the market) in Sydney’s Northern Beaches climbed by $870,000 to $2.803million, or a rise of 45 per cent, for homes near Barrenjoey High School

‘The strong property price growth reflected record low interest rates, rising consumer confidence and demand being greater than the levels of housing stock on the market.’

House prices near schools are surging at annual levels well above the norm, new Domain sales data for July 2021 showed.

Median prices at Avalon Beach on Sydney’s Northern Beaches climbed by a yearly pace of $870,000 to $2.803million, or a rise of 45 per cent, for homes near Barrenjoey High School.

In Cronulla, in Sydney’s Sutherland Shire, house prices increased $650,000 to $2.1million, or by 44.8 per cent, for homes near Burraneer Bay Public School. 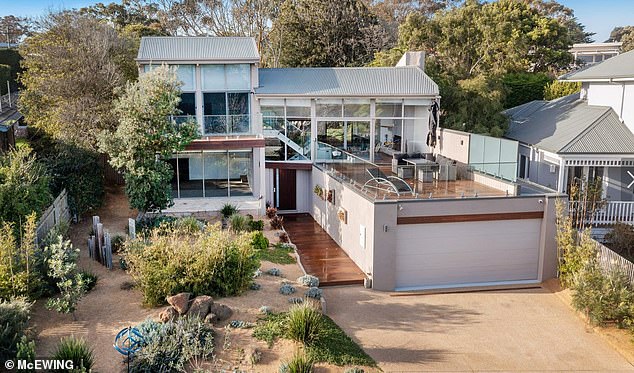 Victoria’s Mornington Peninsula south-east of Melbourne did well too with house prices at Mount Eliza (pictured) up $605,000 to $1.93million or 45.7 per cent or they were near Kunyung Primary School

Victoria’s Mornington Peninsula south-east of Melbourne did well too with house prices at Mount Eliza up $605,000 to $1.93million, or 45.7 per cent, near Kunyung Primary School.

Domain’s chief of research and economics Nicola Powell said annual mid-point price growth for houses near schools was often up to 20 percentage points higher than homes in the rest of the same suburb.

‘It shows that Australians are prepared to pay for easy access to public schools,’ she said.

‘When people are looking for a home, they’re looking for a lifestyle, and education is a big part of that picture, be it in the inner-city suburbs or the coastal regions of Australia.’

Originally published as: The surprising stat that proves Australians are much richer than they think – and the postcodes where house prices are surging by $900,000 a yearThe most popular suburbs for property transactions over the past year revealedHow much does it cost to buy a house in Melbourne’s most popular school zones?

Melbourne may have become Australia’s cheapest capital city in which to rent but in its...

Home owners gain up to $180,000 in six months while savers lose money: Canstar

Home owners who bought property six months ago are up to $180,000 better off than if they had...